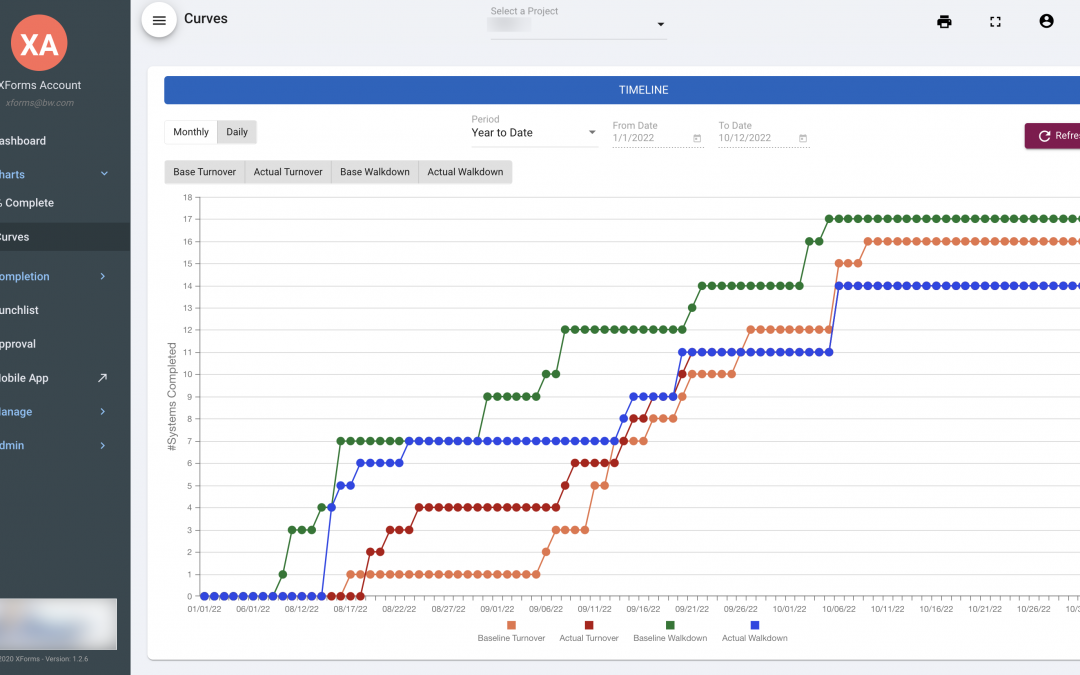 Relative to commissioning projects, what is a commodity curve?

Simply put, its a way of tracking planned versus actual dates for completions.

There’s lots of writeups about this project controls method for tracking project progress.  One good writeup is a Virginia Department of Trasnportation’s writeup about the subject, which can be found here.   In the article, VDOT explains how tracking project progress using commodity curves is a simple way to make sure major deviations of planned vs. actual scheduled values can be viewed early in the construction process, so that resources can be allocated to the areas of the project showing signs of delays.  Visually-speaking, the charts will plot time on the x-axis, and the cumulative value being tracked on the y-axis. When you plot planned versus actual commodity curves, you will see a difference between the 2 curves at any given point in time on the chart.  This difference is the delta, or the value of the actual work completed that differs from the scheduled work to be completed.  In virtually all cases, the actuals curve will lie below the scheduled curve, indicating delays.  The larger the delta, the larger the delays, which in the world of construction can equate to tens of thousands of dollars or more per day of delay.

Here’s a screenshot of page 11 of the VDOT article mentioned above, titled “Tracking Project Commodities for Progress Control“.  The chart illustrated below shows planned versus actual curves.  The red line is actual, and the black line is planned.  Notice that the delta is greatest around the time value between 4 and 8, suggesting that delays were greatest during that timeframe.  Also notice that the curves are in the same position on time 9 and time 10, suggesting that the project accelerated around time 8 and caught up to the scheduled progress by time 9, with an on-time completion at time 10. 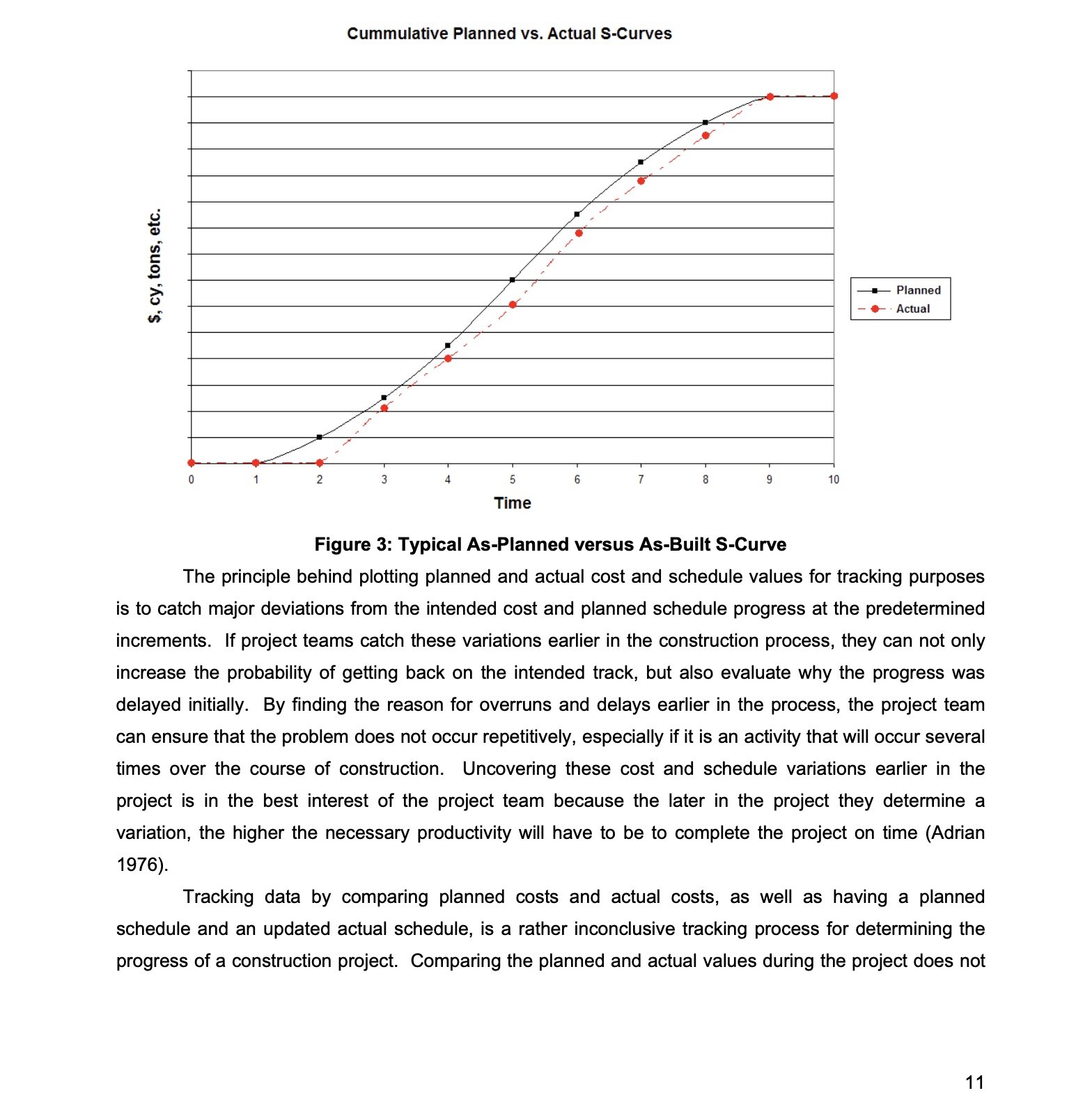 How this is implemented in XForms Cx

This is when the commissioning team has completed all their checklists and tests, and has verified that all the components and devices in that system are working propertly and according to specifications.

How to set up your walkdown and turnover dates

In XForms Cx, this is done from the Manage > Systems screen.  When you go there, you will see your systems displayed in a grid (assuming you imported/added them previously).  On the far right of each listed system row, you can click on the edit icon to pull up that system detail in a popup window, where you can then edit the dates.  There are also two on/off switches that you can toggle to denote when the walkdown or turnover for the system has been completed. 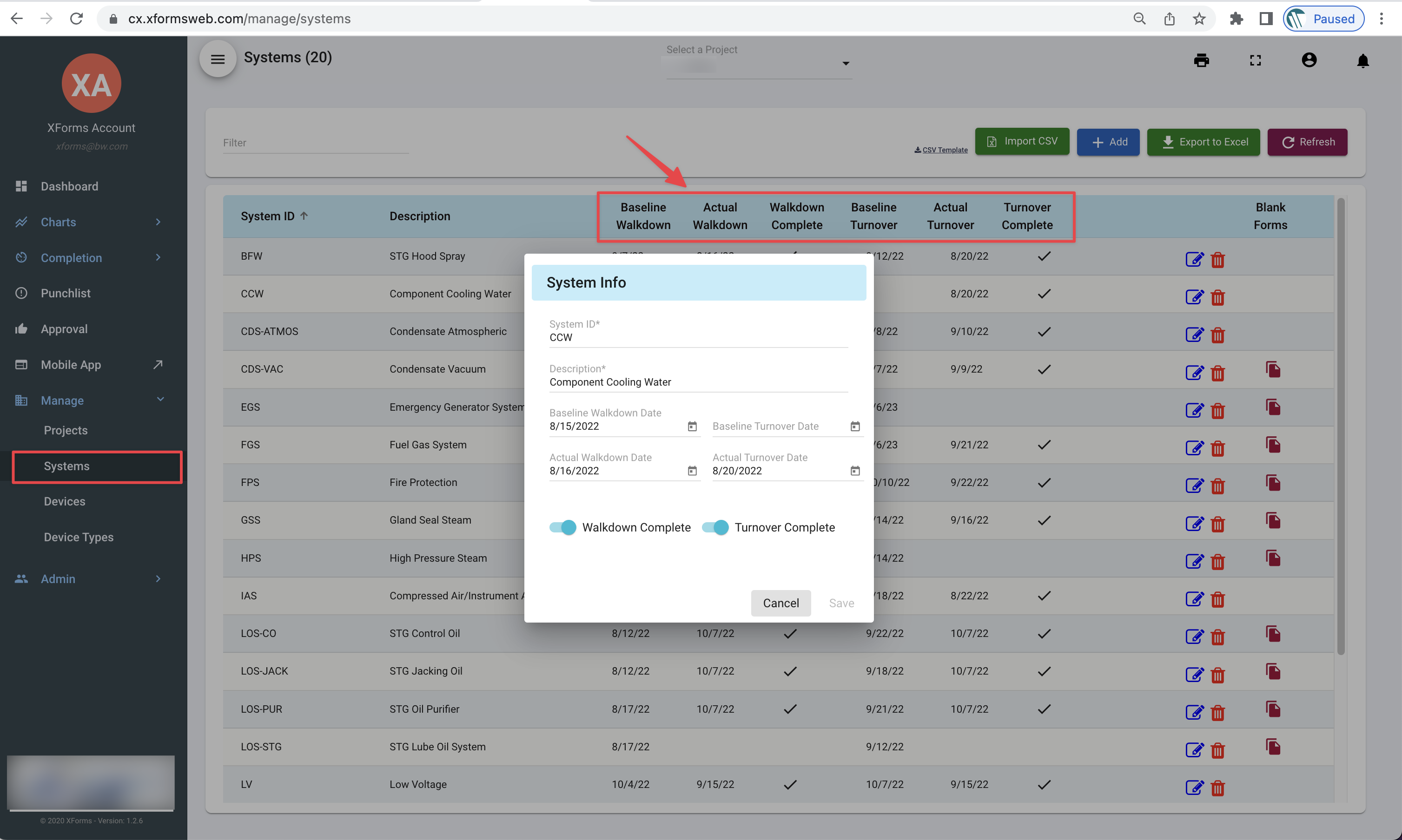 While you can manually edit the walkdown and turnover dates from the screen displayed above, you can also import these dates.  This is something that you would typically do at the beginning stage of project setup, using the green “Import CSV” button on the top right of the Manage > Systems screen.  First, download the CSV template by clicking on the tiny link immediately to the left of the green Import CSV button.  Then populate it with your system codes, along with your baseline dates for walkdown and turnover.

We have had some interest to expose the walkdown and turnover dates to our RESTful APIs, so that an integration can be made between some project planning tools and XForms Cx.  While this is not currently available as of the date this article was written, it’s a feature that’s on the product roadmap.

How to view your commodity curves

To view your curves, navigate to Charts > Curves in the Cx Dashboard web app.

Click/tap the button below.